– Adjectives and adverbs of manner.

– Indefinite quantifiers: a little, a lot of, lots of, too much …

– So, too, either and neither

– What is the matter?

– What was wrong with you?

– Festivals around the world

– Connectors: although, despite/ in spite of, however and nevertheless.

– Reading and listening skills are about the topics: Traffic, films, festivals around the world and sources of energy. 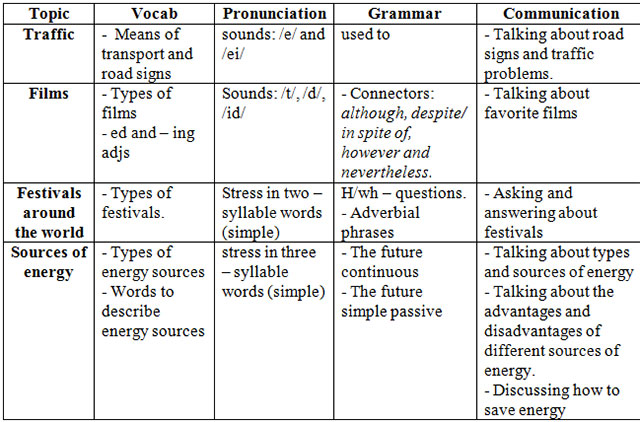 I. Choose the word whose underlined part is pronounced differently from the others.

II. Choose the word that has a different stress pattern from the others.

B. VOCABULARY AND GRAMMAR.

B. Sure. What film shall we see?

II. Put the correct form of the verb in brackets.

I. Read the following text carefully and choose the correct answer A, B, C or D for each of the gap.

II. Read the following text carefully and choose the correct answer A, B, C or D for each of the gap.

Ewan McGregor was (1)_____ in Scotland in 1971. He decided to be an (2)______ when he was only nine and he (3)_____his first film in 1992. So far in his career he has appeared (4)_____ a lot of different types of films, including comedies, musical, dramas and the Star Wars movies. In his career Ewan has worked with like actresses Cameron Diaz and Nicole Kidman, and his films have won lots of awards. He loves acting and when he finished (5)_______ the musical, Moulin Rouge, he said, “I have never been happier to do anything in my life”.

III. Read the passage and choose the best answer.

Yesterday, on the way Trang chủ from school, I saw an accident. A boy was run over by a taxi when he was riding his bicycle. The boy’s leg was broken and it was bleeding badly. Someone there tried to stop the bleeding. They put pressure on it and held it tight. A man used his mobile phone to call the emergency service. Some minutes later, an ambulance arrived and sent the boy to the hospital. Two policemen came to the scene immediately. Some people told the police that the taxi was driving at a very high speed when the accident happeneD. Some others began talking about the traffic accidents these days and blamed the increasing number of accidents on the roads for careless driving and drunk drivers.

1. What did the writer see yesterday?

5. How was the driver driving when the accident happened? – Very…………….

IV. Read the text and answer the questions:

Titanic is a romantic film, which was directed by James Cameron. However, it’s also about a disaster. It stars Leonardo DiCaprio and Kate Winslet.

The film is about the sinking of the ship Titanic on its first voyage. The main characters are Jack Dawson and Rose Dewitt Bukater. Jack saves Rose from killing herself during the journey on board the ship. Although they are from different social classes, and Rose is already engaged, they fall in love. The film has a sad ending: the Titanic sinks and more than a thousand people die in the disaster, including Jack.

Critics say it is a must-see. I agree because the story is moving and the acting is excellent. The special effects, visuals and music are also incredible.

What kind of film is Titanic?

Who does Titanic star?

What is Titanic about?.

How is the ending of Titanic?

5.What do critics say about Titanic ?

V. Read the text and choose the best answers.

Easter is an important Christian festival and holiday. It is (1)______ to celebrate the resurrection of Jesus Christ. Easter is not a fixed holiday. Its (2)______ varies between 22nd March and 25th April. People celebrate Easter (3)______ the worlD.
In the UK, Easter is a public holiday. People (4)______ Easter chocolate eggs to their friends and family. There are also egg hunts for kids. In the US, Easter is a (5)______ holiday. People can go to church and have a special family meal. They also (6)______ egg-hunts and give gifts of coloured eggs. In Russia, Easter is one of the (7)______ important holidays. People celebrate it (8)______ an Easter breakfast or meal. They also create very beautiful Easter eggs.